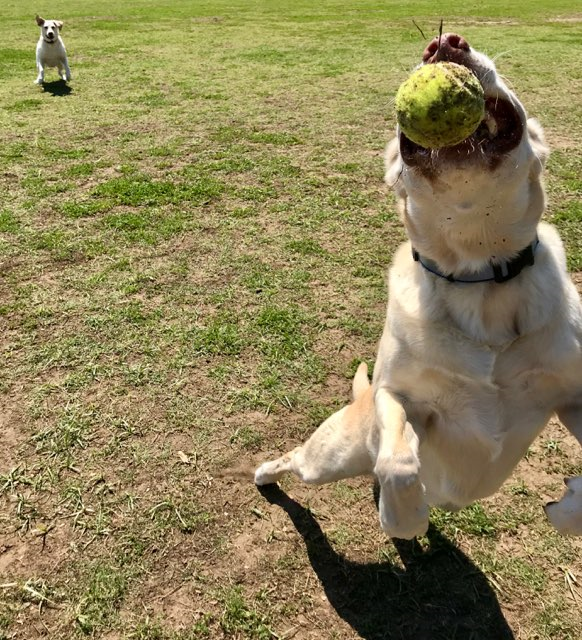 I have a beautiful blonde lab named Stu. His favorite thing in the world is to play ball. He can do it for hours. He loves playing ball so much that whenever anyone comes to our door, he grabs a toy to greet them, just in case they might want to play a game of fetch. So, you can certainly understand when early in 2017, he started limping whenever he would play fetch. We took him in and did all the therapies possible to help alleviate his pain. It got to where he could no longer play fetch at all. After one throw, he was in pain. He always was happy and hopeful, but it was obvious he was in pain and playing fetch was no longer an option. On one visit to Dr. E for yet another shot, she mentioned stem cell therapy and sent me home with the information. After lots of reading, googling, and conversations with my husband, we decided to give it a try. Stu isn't at the end of his life, but only about half way there. We adore this funny happy dog. We took the leap. Stu was almost a completely different dog about a week after getting his stem cell injections. He felt better and had spring in his step. Actually, the toughest part of the process is trying to keep him from jumping and playing during the healing time. Stu felt so much better, he was almost like a puppy! It was truly amazing! Now here we are coming up to a year after the whole process and Stu is running and playing fetch again just like his old self. We are so grateful that Dr. E educated us about stem cell therapy. It does work! I have a dog that would happily play fetch with you to prove it!