What is VetStem Regenerative Medicine?

is a broad definition for innovative medical therapies that will enable the body to repair, replace, restore, and regenerate damaged or diseased tissues.

Despite its relative infancy, regenerative medicine is not new. Success in numerous animal models of disease and emerging success in human clinical trials for Crohn's fistulas1 and stroke,2 along with hundreds of ongoing clinical trials (see sidebar) support the rationale for stem cell use, and now success, in veterinary medicine. VetStem collaborative and clinical research demonstrate positive results in treating horses with tendon and ligament injuries, osteochondral defects, and osteoarthritis.3-6 The first peer-reviewed double-blinded multicenter study for adipose-derived stem cell therapy use in canine osteoarthritis of the hip showed significant improvement in all post treatment evaluation times for lameness, pain, and range of motion. Similar results have been obtained for canine elbows and stifles.

Stem cells are multipotent and can differentiate into tendon, ligament, bone, cartilage, cardiac, nerve, muscle, blood vessels, fat, and liver tissue22,23 (see figure below). The stromal fraction that is harvested from adipose tissue is a heterogeneous mixture of regenerative cells (see below).

Stem cells are harvested from the animal 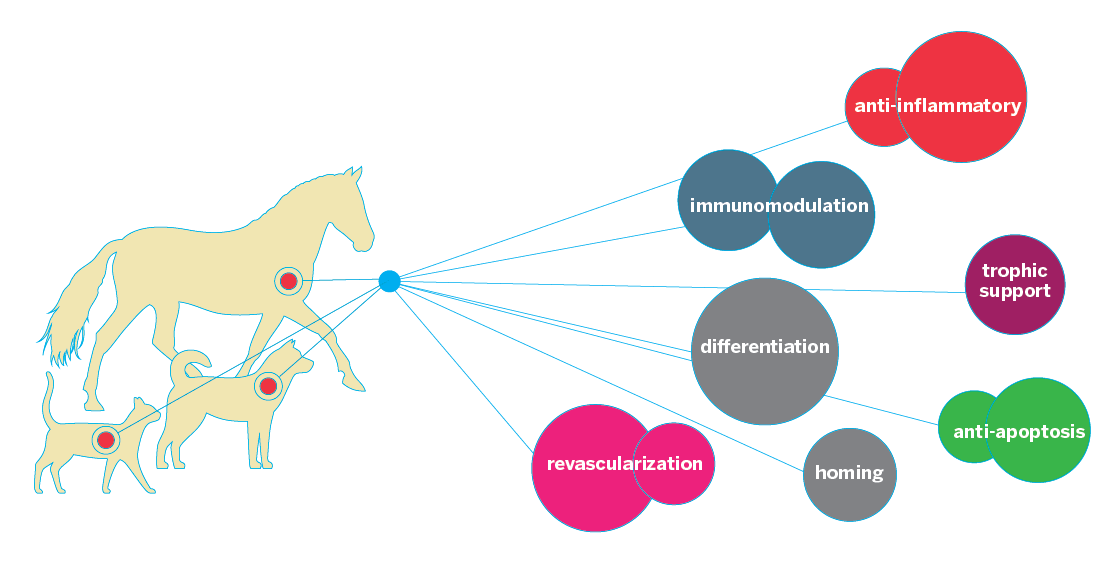 Harvested cells are a heterogeneous mixture of cells with many functions

VetStem Regenerative Cell Therapy is based on a clinical technology licensed from Artecel Inc. Original patents are from the University of Pittsburgh and Duke University.

VetStem Regenerative Cell (VSRC™) therapy delivers a functionally diverse cell population able to communicate with other cells in their local environment. Until recently, differentiation was thought to be the primary function of regenerative cells. However, the functions of regenerative cells are now known to be much more diverse and are implicated in a highly integrated and complex network. VSRC™ therapy should be viewed as a complex, yet balanced, approach to a therapeutic goal. Unlike traditional medicine, in which one drug targets one receptor, Regenerative Medicine, including VSRC™ therapy, can be applied in a wide variety of traumatic and developmental diseases. Regenerative cell functions include:

Adipose-derived MSC studies demonstrate a diverse plasticity, including differentiation into adipo-, osteo-, chondro-, myo-, cardiomyo-, endothelial, hepato-, neuro-, epithelial, and hematopoietic lineages, similar to that described for bone marrow derived MSCs.22 These data are supported by in vivo experiments and functional studies that demonstrated the regenerative capacity of adipose-derived MSCs to repair damaged or diseased tissue via transplant engraftment and differentiation.6,9,30

Homing (chemotaxis) is an event by which a cell migrates from one area of the body to a distant site where it may be needed for a given physiological event. Homing is an important function of MSCs and other progenitor cells and one mechanism by which intravenous or parenteral administration of MSCs permits an auto-transplanted therapeutic cell to effectively target a specific area of pathology.

Apoptosis is defined as a programmed cell death or “cell suicide”, an event that is genetically controlled.35 Under normal conditions, apoptosis determines the lifespan and coordinated removal of cells. Unlike during necrosis, apoptotic cells are typically intact during their removal (phagocytosis).