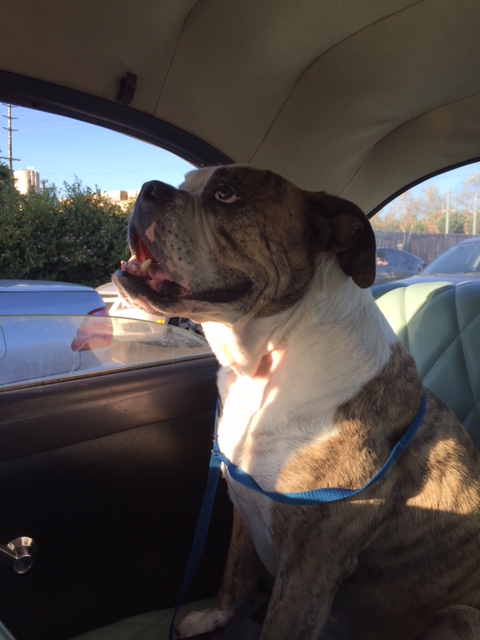 In August 2013, Knuckles had surgery to repair a torn cruciate ligament and to stabilize luxating patella. Unfortunately, just about eight weeks after surgery (right around the time he was supposed to be able to start taking short walks again), he stopped bearing any weight on his leg. After weeks of x-rays and rechecks, it was discovered that he had developed MRSA in his knee joint. In December 2013, he had a second surgery to remove the hardware from the first surgery and to flush the infection from his knee. He was on a long course of very harsh antibiotics to clear his MRSA. We then did hydro-therapy using a water treadmill to help him gain back some of the muscle and range of motion which he had lost. Over the next two years, his condition continued to get worse. He lost over two inches of muscle to atrophy as a result of avoiding using his leg. After two surgeries and thousands of dollars, Knuckles honestly seemed worse off than before any treatment. He was taking large amounts of anti-inflammatory, pain medicine, supplements, and also receiving injections of joint treatment. Even with all of this, he was clearly in a large amount of pain. He avoided walking, and generally just laid around the house. I thought that we had tried everything, and that the rest of his life would be spent as an "old man with a bad knee". When we were referred to Dr. Mullen, she told me that the MRSA had caused such damage to Knuckles' knee that bone was rubbing on bone. We could continue using medication to try to keep him comfortable, but that would not reverse the damage that had been done. His pain level was likely to continue to increase until, at some point, we would probably have to amputate. Then she told me about VetStem and the PRP (platelet rich plasma) treatment. Although the specific level of results could not be guaranteed, it was a real chance for him to get back some of what he had lost! We decided to go for it, and I could not be more thrilled with the results! At 7 years old, Knuckles has basically turned back into a puppy. Thirty days after his treatment, he was able to stop taking any medications at all! He now bears full weight on his leg, and he has gained back almost all of the muscle. He is once again able to play with his sister and his best friend, climb up in the bed for snuggles, and do his favorite thing- chase bubbles. He is so much happier now that the pain is gone. I actually had no idea how much he was hurting until he was feeling better. One person who had only known him with his "bad leg" actually commented that his eyes shine brighter since the treatment. A close friend who has known him throughout the entire ordeal cried tears of happiness with me to see him back to his old self. I cannot thank Dr. Mullen and VetStem enough for the gift they have given us. I did not ever think that my big, sweet boy would ever feel this well again! Thank you so much, VetStem!