Zeke - Lameness from an acute injury to cruciate ligament, followed by arthritis in the knee 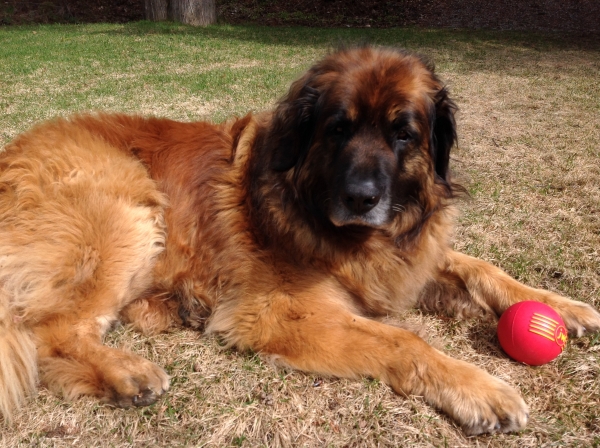 "Just over two years ago, Zeke, our 125 pound Leonberger, became lame after a big backcountry ski with us. The diagnosis was most likely a partial CCL (canine cruciate ligament) tear. The recommended two weeks of rest did not help, nor did four weeks. After a month, x-rays showed arthritis had developed in one knee. He was put on an anti-inflammatory. This certainly helped his pain, but not the problem.

After a year of this, he began having more difficulties. He frequently needed a boost from us to get up. He would whimper in pain. He had what I called a delayed hang time; holding his leg in the air, prior to bending it. Digital radiographs at this point revealed moderate arthritis in both knees. It was suggested that we increase his anti-inflammatory medication, and we began monthly pain reliever shots. There was perhaps mild improvement. It was at this point I heard about stem cell therapy. Over the next several months I consulted with three different vets trained in the procedure. All believed the therapy would help. One believed that the Cadillac of treatments would be TTA (tibial tuberosity advancement) surgery on both knees and stem cell therapy. Zeke was still quite active and happy, so the thought of double knee surgery and the long recovery time was not in my books. After swim season was over, we decided to go through with the stem cell therapy. It has been four months since the stem cell injections (both knees and an IV). Zeke has definitely improved. He no longer needs help getting up. He does not whimper in pain. His hang time is non-existent, and his anti-inflammatory has been reduced by about 80%. He has a bounce in his step that I forgot existed and hikes are no longer sheer drudgery. Thank you for offering this procedure!" - Tracey