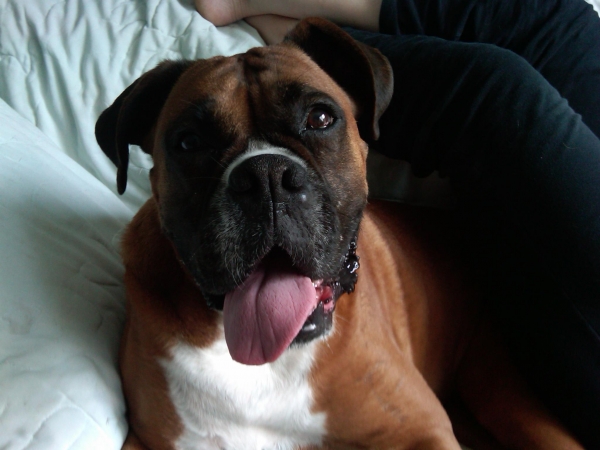 Tucker was a 4-year-old Boxer who was EXPLOSIVE in his energy level. He would run and play outside for 4-6 hours a day. One day he saw a cat and followed it off a 12 foot embankment at a dead run. He sailed through the air and when he landed his right rear leg buckled. When he got up he was limping and it got worse after a few days, so we took him to the vet and he was put on anti-inflammatory meds. This process went on and off for the next 12 months as his hind leg deteriorated to the point that he could not walk up steps and stopped playing outside. He did not want to go on walks anymore, other than to go outside and take care of “Business”. We were scared that he would not be able to walk at all in 6-12 more months. Our Vet, Dr. Christi Juliano, at Community Animal Hospital of Poughkeepsie, told us about VetStem and 1 month past his 5th birthday we did the procedure. Well, it took 6 months to fully take effect, but he went back to his old self of running, jumping, and playing for hours outside. It was 2 years on February 5th, 2012 since he had the procedure and he is like a young Boxer again. Thank you for saving his life!! Larry & Robbi M. and Tucker