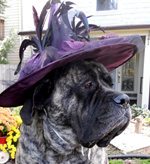 Phoebe, an English Mastiff, began to limp at the age of 6 months. She was growing very quickly and so we were worried. At the time, we took her to the vet's, and had some x-rays done. The x-rays showed some elbow dysplasia. Phoebe never ran. Never. She did not enjoy walking very much either. Her limping stopped, but she was never an active dog. (Or at least as active as Mastiffs can be, that is.)

At two years of age, Phoebe's hips and elbows were checked, and while her hips were within the normal range, both her elbows were bad. One elbow had a UAP (Ununited Anconeal Process), the other was also showing changes. Back to our vet, Dr. Roberta Haught of Marietta, OH. She recommended that we consider surgery.

After a great deal of research, we contacted Dr. Haught and asked her opinion of stem cell therapy. She did some checking on her own and called us with her thoughts and ideas. She was willing to become trained to do Vet-Stem's retrieval and implantation and so at the time we had Phoebe spade, we had the stem cell treatment done.

Within weeks we were noticing subtle differences. Phoebe was willing to get up on the couch unassisted. She was happy walking and began to trot around the backyard. At two months past the treatment, she surprised us by leaping up onto a wall in our yard, something she had never done before. Her greatest joy is walking, trotting off lead and exploring. It is a beautiful thing to see her move.

Phoebe now has a daily walk of a mile and enjoys her outings, demanding that she go for a walk now, instead of being disinterested and dragging behind the walker. She no longer takes pain medicine and is much more active and interested in what is going on. Phoebe is a trained therapy dog with TDI and we are looking forward to beginning our library visits again. None of this would have been possible without Vet-Stem and the stem cell treatment. For Phoebe, it has been nothing short of a miracle.