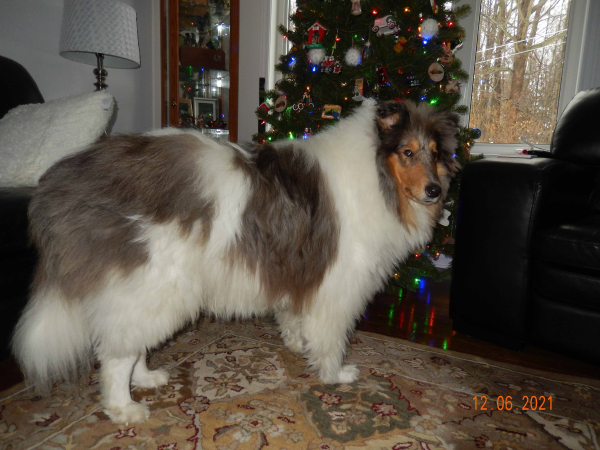 Description: At 3 months old he started having stomach problems. Around 5 months old Casey was not eating very much, losing weight, loose stools, diarrhea etc. Casey had many appointments with his veterinarian for blood tests and x-rays. At 9 months old, we had an abdominal ultrasound and weeks later he had biopsy on his stomach and small intestine. The results supported a diagnosis of Inflammatory Bowel Disease (IBD). To try and control Casey's IBD he was put on the following drugs: Prednisone, Metronidazole and told to follow a strict Hypoallergenic diet. It was a nightmare trying to control his IBD from the drugs to finding food he could or would eat. His fur never grew back where he was shaved for the ultrasound. He wasn't playing at all. Our aim was to try and get him off Prednisone. We tried Cerenia and Atopica. Nothing worked! Because we were doing regular blood work at 2 years old we discovered liver problems - elevated liver enzymes and a gallbladder infection. Casey had to have a liver biopsy. The conclusion was that all the drugs were affecting his liver. Dr. Cyrus suggested that we should consider stem cell therapy for Casey's IBD. He said that it was newly being used to treat IBD, but there was no guarantee that it would work. June 11, 2021 Casey had his first stem cell treatment. He had his second on September 15, 2021 and his third on January 12, 2022. Comments: Casey is on the road to recovery. He is taking a small dose of Tylosin every other day. He eats mostly pork, beef and veggies but the great thing is he has started to eat about 1 1/2 cups of Royal Canin Hypoallergenic Hydrolyzed Protein kibble a day (on his own). He is gaining weight and his fur has all grown back and he is beautiful. His stools are great. But best of all, he plays. He plays with us and has two dog friends that he actually really plays with. Almost every day he runs, he chases a thrown stuffy, he rolls on his back (he never did before) and he sleeps for longer periods at a time. He is getting better every day it seems. Dr. Cyrus and the stem cell treatments saved his life and gave our pup back to us. Note: Pet owner received one free year of stem cell storage in exchange for their honest testimonial.