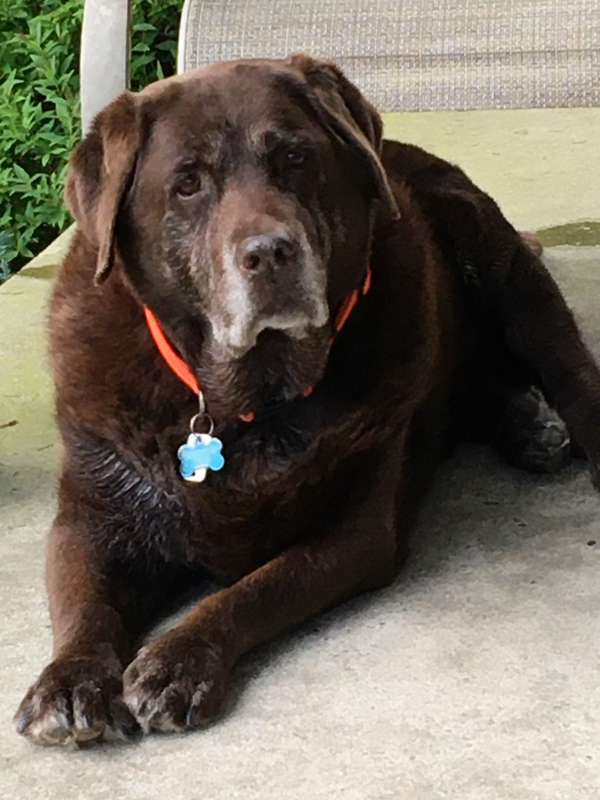 Our 12 1/2-year old chocolate Labrador retriever Molly has severe arthritis in both of her back hocks, and her left elbow. A vet described her left elbow as â€œa messâ€ after seeing her xrays, and she limped quite noticeably on it. We were thinking of doing stem cell therapy but then something happened and one day in early February, she couldnâ€™t walk at all. She couldnâ€™t bear any weight at all on her back legs, and both back paws knuckled under when we held her upright and tried to help her walk. She literally couldnâ€™t walk. On examination, when her paws were turned under by the vet, she didnâ€™t turn them back to normal, padside down. We chose to not do the MRI that would determine if she had a herniated disk and use that money to have stem cell treatment instead. She had xrays that showed severe arthritis in those 3 joints, plus arthritis in her spine, but all her other tests and examinations revealed that otherwise she was in excellent health, and happy. The vet took extra fat to ensure the 3 joint injections we wanted, and the IV dose we felt very strongly that she should get also as we had read that those cells would migrate to wherever they were needed in her body. I also wanted to either store extra doses or a retention sample, so she wouldnâ€™t need to go through the fat harvest surgery if cells were needed in the future. She was carried into the surgical facility on a gurney and injections were done on February 26, 2021. At two weeks after her stem cell injections, Molly was able to support her own weight with help. At her one month recheck after the injections, I think even Molly was surprised when she was able to take a few steps. Next week she will be two months post stem cell therapy and is walking on her own again. When her paws are turned under (knuckled), she rights them within two seconds now. Mollyâ€™s vet believes that the IV dose she received helped her tremendously. She is walking again, on her own and without assistance, and she is definitely limping less on that front elbow. While we do realize at her age and the severity of arthritis in her joints she wonâ€™t be a puppy again, I would definitely expect her to continue to improve and continue to be mobile. I would do this again for her in a heartbeat, and we are so thankful this technology exists. Thank you, VetStem, for giving us back our happy girl. Note: Pet owner received one free year of stem cell storage in exchange for their honest testimonial.