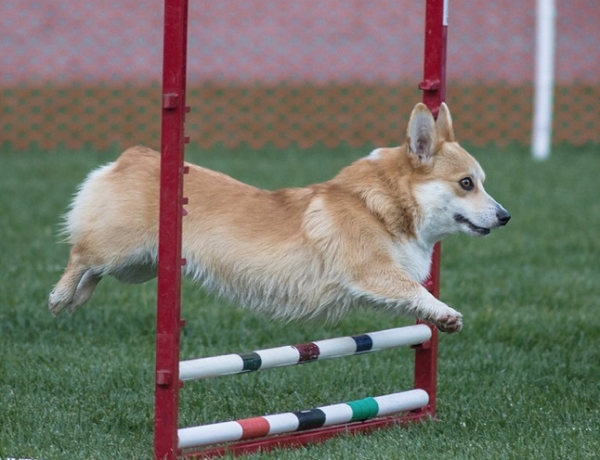 Kirby is a 7 year old Pembroke Welsh Corgi. We have been competing in Agility since he was 1 1/2 years old. About 4 years ago he started having intermittent lameness problems in his hind end including soreness in his hips and left knee. He was evaluated by Dr. Holly Mullen, the excellent Surgeon at VCA Mission Valley. We did cold laser, underwater treadmill, and gave him anti-inflammatory meds (Carprofen). These would help for a while and then he would be lame again. About two years years ago we did an MRI of his hips and knees and they were not damaged. He was given PRP injections in both hips and knees. I was told that this usually worked well but only for about a year or so. He had a great year after that! We were doing light agility and lots of hiking. Last March the same soreness issues came back and we did the stem cell therapy. The minor surgery to harvest the fat was easy and he recovered quickly. He was given injections in both hips, knees and an IV dose. Within 2 months he was much better and today he is doing great. He is fit and hikes at least 12-15 miles with me each week. We are also competing at Agility trials about once a month with an 80% Q rate!! I'm so grateful to VetStem for their help and that they have his cells in storage so we can give him more injections in the future if needed!! Note: Pet owner received one free year of stem cell storage in exchange for their honest testimonial.