Rowdy, a Labrador retriever, was successfully treated with VetStem Cell Therapy for osteochondritis dissecans (OCD) in his hock.

When Rowdy, a Labrador retriever, was three years old, he injured his right rear hock (ankle) and began limping and experiencing swelling. According to his owner, he was unable to play like a normal Lab his age. His owners took him to Dr. Scott Gustafson, a board-certified veterinary surgeon who owns the mobile veterinary practice Surgery 4 Pets and is a founder of and surgeon at Olympia Veterinary Specialists. One of Dr. Gustafson’s specialties is orthopedic surgery, and he has a special interest in minimally invasive surgery and therapeutics.

Upon examination, Dr. Gustafson diagnosed Rowdy with osteochondritis dissecans (OCD) in his right rear hock. OCD is a developmental disease that can occur in rapidly growing large breed dogs. It is an inflammatory condition that occurs when diseased cartilage separates from the underlying bone. While the exact cause of OCD is unknown, there are certain factors that may contribute to the development of the disease including genetics, rapid growth, trauma, lack of blood flow, and hormonal factors. Dr. Gustafson, a long-time VetStem user, recommended treatment with VetStem Cell Therapy.

To begin the process, Dr. Gustafson collected fat tissue from Rowdy’s abdomen during a minimally invasive anesthetic procedure. Once collected, the fat was aseptically packaged and shipped to the VetStem laboratory in Poway, California. VetStem lab technicians processed the fat to extract and concentrate the stem and regenerative cells contained therein. Dr. Gustafson elected to have Rowdy’s cells put immediately into culture to grow additional stem cells for future treatment. Once the culture was complete, Dr. Gustafson requested two stem cell doses for treatment. Rowdy received one dose of his own stem cells into his injured joint and one intravenous dose.

Following his first VetStem treatment, Rowdy received an identical treatment approximately two years later and a third treatment one month after that. According to his owner, Rowdy had a great response to stem cell therapy. He stated that Rowdy is now nine years old and “has been able to be a Lab without the swelling happening all the time. He has had a much higher quality of life. Thank you!” Rowdy has not required a stem cell treatment since 2018, though his owners continue to bank his stem cells for potential future use.

Stem cells are regenerative cells that can differentiate into many tissue types, reduce pain and inflammation, help to restore range of motion, and stimulate regeneration of tendon, ligament, and joint tissues. According to surveys answered by owners and veterinarians, greater than 80% of dogs showed an improved quality of life after receiving VetStem Cell Therapy for orthopedic conditions.

About Scott Gustafson, DVM, DACVS
Dr. Gustafson graduated with his DVM from Oregon State University and Washington State University in 1985 and completed his surgical residency and obtained an MS in veterinary surgery from Colorado State University in 1989. He became a Diplomat of the American College of Veterinary Surgeons in 1990. Dr. Gustafson lectures on stem cell therapy at veterinary conferences and has published and participated in stem cell clinical trials. He has been VetStem Credentialed since 2007 and has provided VetStem Cell Therapy services for nearly 100 patients. 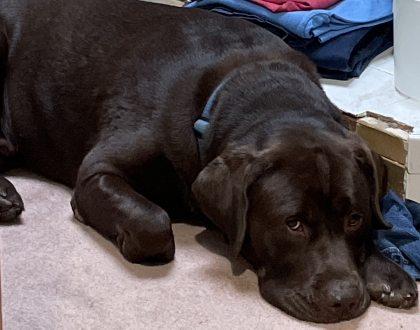