Charm is a nine-year-old dalmatian and accomplished agility champion. Though she has always had a strong will to perform, Charm has had a few setbacks along the way. In 2016, Charm partially tore her cruciate ligament in her left knee. After consulting with her veterinarian and doing some independent research, Charm’s owner elected to have Charm treated with platelet rich plasma (PRP) and VetStem Cell Therapy.

To begin the process, fat tissue was collected from Charm’s inguinal area during a minimally invasive anesthetic procedure. Once collected, the fat was aseptically packaged and shipped to the VetStem laboratory in Poway, California. VetStem lab technicians processed the fat to extract and concentrate the stem and regenerative cells contained therein. One stem cell injection was shipped to her veterinarian for treatment. Approximately 48 hours after the initial fat collection procedure, Charm received one dose of her own stem cells and PRP into her injured knee.

According to her owner, Charm recovered well and returned to agility five months later. Unfortunately, this then four-year-old active dog, continued to show signs of intermittent lameness and stiffness. Though her X-rays showed no arthritis, further testing revealed that Charm had Lyme disease. This helped to explain her lameness as a few of the common symptoms of Lyme disease in dogs are painful or swollen joints and lameness that comes and goes. Though there is limited data regarding stem cell therapy for Lyme disease, Charm’s owner elected to have her retreated with stem cells in an attempt to manage her symptoms.

Charm received a second round of stem cell injections approximately one year after her initial treatment. This time, she received one dose into her left knee and one intravenous dose in conjunction with PRP. She was also treated with homeopathic remedies, hydrotherapy, and strength training. According to her owner, Charm bounced back and returned to master level agility trials. Her owner stated, “She feels great, her quantitative Lyme levels are subclinical, and she is running, jumping and playing like a puppy again.” She later went on to win Agility Champion of Canada Awards, a 5th place at Agility Association Canada Nationals plus a Distance Log from the Dalmatian Club of Canada. Charm received a third round of stem cell injections, both in her left knee and intravenously, approximately two years later.

Fast forward another few years and Charm, being the active athlete that she is, injured the cruciate ligament in her right knee. Fortunately, she still had multiple stem cell doses cryopreserved. So, in January of this year, Charm received a stem cell injection into her right knee. Once again, her owner noticed marked improvement. She stated, “This now nine-year-old girl is feeling wonderful just 5 weeks after her stem cell injection and no signs of any arthritic pain!” 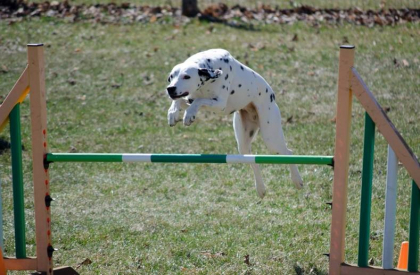