Lollie, an English Labrador, was successfully treated for hip and elbow arthritis with VetStem Cell Therapy.

Lollie is a beautiful cream, English Labrador Retriever. Unfortunately, when Lollie was just six months old, something appeared to be off. Her owners noticed that after walking a block, she would lie down and not want to get up. This is obviously not characteristic behavior for an energetic puppy so Lollie’s owners took her to the vet. X-Rays revealed that Lollie had joint dysplasia in her elbows and hips, meaning the affected joints were malformed. This condition is hereditary and is especially common in larger breed dogs like Labradors.

In addition to bilateral elbow arthroscopy and a surgical procedure called triple pelvic osteotomy on her left hip, Lollie’s veterinarian proposed two treatment options to potentially improve Lollie’s prognosis in the long run. Those options were long-term treatment with pain medications and nonsteroidal anti-inflammatory drugs (NSAIDs) or VetStem Cell Therapy. Given that Lollie was young and long-term use of medications may have potentially dangerous side effects, Lollie’s owners opted to try stem cell therapy.

To begin the process, fat tissue was collected from Lollie’s abdomen during a minimally invasive anesthetic procedure. Once collected, the fat was aseptically packaged and shipped to the VetStem laboratory in Poway, California. VetStem lab technicians processed the fat to extract and concentrate the stem and regenerative cells contained therein. Lollie’s cells were then divided into doses for treatment. Four stem cell injections were shipped back to the veterinarian and additional doses were cryopreserved for potential future use. Approximately 48 hours after the initial fat collection, Lollie received one injection into each affected joint and one intravenous injection.

According to her owners, Lollie had a great response to VetStem Cell Therapy. In fact, it was several years before Lollie began to show signs that her arthritis was affecting her again. Lollie was approximately two-and-a half years old when she received her first stem cell treatment. At around eight years old, she began to strain to get up and would limp on her front right leg. In addition, she did not want to put weight on her left rear leg. New X-Rays showed that her osteoarthritis had progressed and again, Lollie’s owners were given two choices. This time, the options were a bit more dire: major surgery or euthanasia. But there was a third option as well. Lollie still had stem cell doses stored in the VetStem cryobank from her initial stem cell procedure. Once again, Lollie’s owners opted to try stem cell therapy.

Just over six years after her first stem cell procedure, Lollie received four injections of her own stem cells, one into each elbow and each hip. In addition to stem cell therapy, her veterinarian used platelet therapy, which works synergistically with the stem cells and is considered the “gold standard” at VetStem. Once again, she had a great response. According to her owner, it took approximately five months to see concrete results. Lollie’s mom thanked VetStem stating, “Five months later she is dramatically improved. She doesn't limp at all. We have since been able to decrease the FOUR different pain meds and now she takes one Rimadyl a day and we may be able to omit that.”

Unfortunately, many dogs suffer from joint dysplasia which can lead to painful osteoarthritis. Pain associated with osteoarthritis can greatly reduce a dog’s quality of life. According to surveys answered by owners and veterinarians, greater than 80% of dogs showed an improved quality of life after receiving VetStem Cell Therapy for orthopedic conditions. A peer-reviewed study of dogs with chronic osteoarthritis of the hip found that stem cells reduced pain and lameness. Stem cells are regenerative cells that can differentiate into many tissue types, reduce pain and inflammation, help to restore range of motion, and stimulate regeneration of tendon, ligament, and joint tissues. 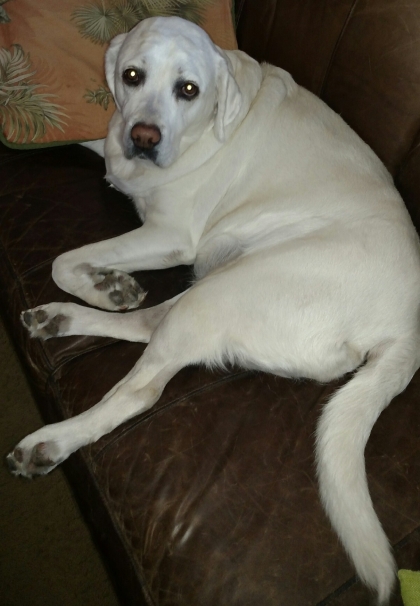