VetStem Biopharma Shares the Success Story of Trinity who was Treated with VetStem Cell Therapy by Dr. Tamera Cole

Trinity, a Ragdoll cat, was successfully treated for kidney failure with VetStem Cell Therapy by Dr. Tamera Cole of The Animal Hospital at Steiner Ranch.

Trinity is a Ragdoll cat who, at approximately twelve years old, was diagnosed with renal failure. She had several symptoms including vomiting, not eating, lethargy, weakness, and weight loss. She was uninterested and spent a lot of time hiding. Her mom worked with several vets to find an effective treatment protocol for Trinity, but she continued to feel bad and her blood kidney values kept going up.

Eventually, Trinity’s mom found Dr. Tamera Cole at The Animal Hospital at Steiner Ranch. Dr. Cole started Trinity on fluids and multiple medications to ease her symptoms and support her kidneys. Though Trinity’s mom noticed improvement, she continued to research additional treatment options. That is when she found VetStem Cell Therapy and brought it up to Dr. Cole. Dr. Cole had previously visited the VetStem facilities in Poway, California where she learned about using VetStem Cell Therapy in cats with kidney disease. Having already completed the VetStem credentialing course several years prior, Dr. Cole was prepared for the stem cell procedure.

To begin the process, Dr. Cole collected fat tissue from Trinity in a minimally invasive anesthetic procedure. The fat was aseptically packaged and shipped overnight to the VetStem laboratory. Once received, VetStem technicians processed the fat to extract and concentrate Trinity’s stem and regenerative cells. One injectable dose was shipped to Dr. Cole and Trinity received an intravenous injection of her own stem cells approximately 48 hours after the initial fat collection. Due to the nature of Trinity’s condition, a multi-dose regimen was recommended. Trinity received a second intravenous dose approximately two weeks after the first.

After stem cell therapy, Trinity’s owner maintained the previous treatment protocol with fluids and medications. Several months later, Dr. Cole tested Trinity’s blood work which showed no signs of kidney disease. Her owner continued the treatment protocol and Trinity remained healthy, started eating again, and gained back all the weight she lost and more. It was a happy ending for Trinity and her mom. That was until earlier this year when Trinity was diagnosed with pancreatitis.

Pancreatitis is a disease characterized by inflammation of the pancreas. Symptoms of pancreatitis vary but may include nausea, vomiting, fever, lethargy, abdominal pain, diarrhea, and decreased appetite. While the prognosis will depend on the severity of the condition, most cases of mild acute pancreatitis have a good prognosis with early intervention and aggressive treatment.

Fortunately, Trinity had stem cells banked from her initial stem cell process. When blood work revealed that Trinity’s kidney values were slightly elevated again, both Dr. Cole and Trinity’s mom agreed to have her treated with an intravenous dose of stem cells in an effort to decrease the inflammation and help heal her pancreas and kidneys. Approximately one month after the treatment, Trinity’s mom reported that she perked up and was eating again. She stated. “I'm so thankful that I've been able to spend so many more years with Trinity. She is a continuous blessing in my life and as you can see from the picture, still shows up to work every day at my home office.”

While very few patients have received VetStem Cell Therapy for pancreatitis, VetStem veterinarians have treated nearly 200 cats for kidney disease. Based upon data from a small number of feline patients treated with VetStem Cell Therapy, blood kidney values were slightly to moderately improved after treatment. More evaluation is necessary however these preliminary results suggest that stem cell therapy may be a viable treatment option for cats with kidney disease. 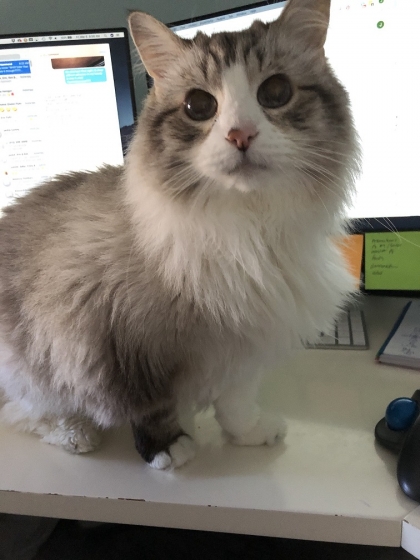