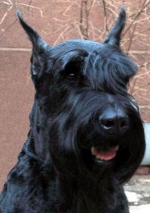 Doc, our beloved 12-year-old Giant Schnauzer, has suffered from deterioration of the right hip for some time now. He is unable to stand for any length of time, and spends most of the day laying down. Doc used to visit children in the hospital, working as a Therapy Dog, but since he has trouble standing and moving about we have had to discontinue his work.

In October '08 we decided to bring Doc in to see Dr. Hoelzler at Garden State Veterinary Specialists, in Tinton Fall, NJ. Dr. Hoelzler performed the Stem Cell Therapy on Doc, and since then he has been improving immensely. Thirty days post surgery he has shown improvement, as well as in his ability to stand for greater lengths of time.

He has been on extended house arrest, keeping his rehab schedule at the top of our priority list. He is now re-gaining his ability to walk and trot better, and does not have such labored movement.

We have seen an improvement in his ability to climb steps and walk around with more ease. It is great to see him being able to get up into his bed and jump up on the couch again, since it is his favorite napping spot.

Since he enjoys Pet Therapy Work so much, we are hoping that he can return to work in the near future.